MIC has issued 13.004.610, 42€ of premiums with a market share of 20.91%. With these data the company reaffirms as leader in the Surety class in Spain for the fourth year in a row. It has surpassed other recognized companies in the sector. 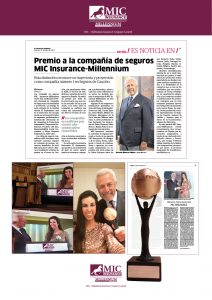 The award was collected by the President of the Company on behalf of the entire MIC team, brokers and underwriting agencies. Thanks to the passion and commitment of the daily work done by our team and by all our partners, suppliers and customers, we can receive awards like this.

This is the second prize received by MIC Insurance- Millennium in this 2017 emphasizing by the innovation and its leader position in the market.

Attached publications and link to the video of the awards ceremony. Thank you very much and congratulations to everyone!